Wielding a master-crafted bolt rifle is the deadly Space Marine Captain. Expand your army with this incredible miniature who can fight from any distance!

Space Marines are great warriors that stand over 7 feet tall with a skeleton stronger than steel. The bio-mechanically enhanced superhumans are encased in ancient power armour that can protect them from the deadliest weapons in the galaxy. Although there is few in number, each warrior is worth a thousand men and could possibly be humanity’s last hope. Their genetic modification and rigorous training means they are left unfazed by any disease and are capable to receive wounds that would easily kill a lesser being. Compared to other Human beings, they are physically and mentally strong with no fear of death. The Angels of Death are superior and therefore entrusted with the most dangerous missions such as tunnel fighting, infiltration and lighting raids behind enemy lines.

Paint your Space Marine Captain using the Citadel Colour System which provides a huge range of water-based colours specifically for Warhammer. Once you have chosen a painting method, you can unleash your creative skills and bring your spectacular miniature to battles of Warhammer 40k.

There are very few Space Marines, so make sure to grab this spectacular miniature and introduce the Space Marine Captain to all your future battles! 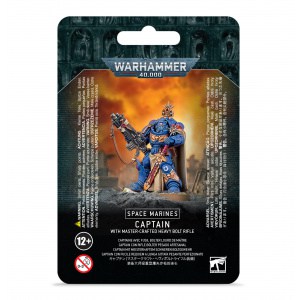 You're viewing: Space Marine Captain With Master-Crafted Bolt Rifle £18.66
Add to basket
We use cookies on our website to give you the most relevant experience by remembering your preferences and repeat visits. By clicking “Accept”, you consent to the use of ALL the cookies.
Cookie settingsACCEPT
Manage consent