Soulblight Gravelords Battletome contains all you need to know to field your very own army. Packed full will amazing art and background information, this is an essential purchase for all fans of vampires, zombies and skeletons!

Set in Warhammer Age of Sigmar the Grand Alliance of Death have just one purpose, to kill all living and impose the order of the dead. The Soulblight Gravelords Battletome includes all you need to know to create your force of the undead and prepare them for battle. Featured inside this 128-page hardback book is showcase of art to help give inspiration on how to paint your army for battles of Warhammer Age of Sigmar. You will also find warscrolls, battle traits and rules so that you know how to field your army of Vampires.

Warhammer Age of Sigmar is a miniature wargame where armies battle it out against each other. Forming part of the Grand Alliance of Death is the eternally hungry monstrosities known as Soulblight Gravelords. Using their everlasting strength and cravings for blood they command legions in name of their creator, Nagash. Determined to conquer the Mortal Realms, they will use their dark powers and raise the dead to do Nagash’s bidding. The army also includes Vampire Lords, strong bearers of the Soulblight curse that will command entire armies of their lesser kin.

Begin your battles straight away by gaining all the knowledge required with the Soulblight Gravelords Battletome!

This hardback book contains 128 pages which include: 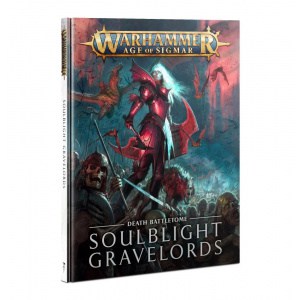 You're viewing: Soulblight Gravelords Battletome (English) £19.95
Add to basket
We use cookies on our website to give you the most relevant experience by remembering your preferences and repeat visits. By clicking “Accept”, you consent to the use of ALL the cookies.
Cookie settingsACCEPT
Manage consent