Wield the untamed power of the warp with this multipart plastic Sorcerer kit! This powerful HQ choice comes armed with a force stave and all rules can be found in the Space Marines, Death Guard or Thousand Sons Codex!

This multipart plastic kit contains the components to assemble the Sorcerer of Chaos. Shaping the galaxy’s destiny with forbidden rituals, they will channel the soul-blasting energies into blasts of flames and moulding the universe. They are the most powerful psyker to be found among the forces of Chaos and serve a similar role to the Librarians for the Space Marine Chapters. Also considered to be physically-gifted Champions of Chaos, they wield the mightiest powers of the Warp.

Due to their constant exposure to Chaos, Sorcerers are haunted by the idea of succumbing to insanity. Although they think they are way above mortal concerns, deep down they are aware that they are just pawns raised by the Dark Gods for nothing more but amusement. During battle even the best psykers can overreach their abilities, such emotions can represent the start of the path to limitless evil. From this point onwards the pysker will endure visions of immortality, if they succumb to temptation will be granted the power of warp.

Find the rules for this model in the Codex: Chaos Space Marines, Codex: Death Guard and Codex: Thousand Sons. We highly recommend using the Citadel Plastic Glue and Paints to assemble your miniature and bring them to life! 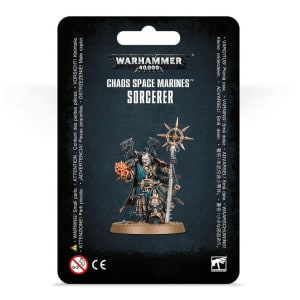 You're viewing: Sorcerer (Chaos Space Marines) £14.02
Add to basket
We use cookies on our website to give you the most relevant experience by remembering your preferences and repeat visits. By clicking “Accept”, you consent to the use of ALL the cookies.
Cookie settingsACCEPT
Manage consent