Combine factions and compete to smash bases. With eight different factions to choose from, each game will be completely different!

Smash Up invites 2-4 players aged 12 and above to compete and destroy bases. The goal of the game is to win by scoring over 15 victory points, earned by taking over bases. Each faction is different, the pirates move cards, the zombies bring cards back and the dinosaurs bring power.

Smash up comes with 2 main playing cards. Each minion card will have its own special ability and power rating, these are played on a base of the players choosing. Some minions will have talents which can occur one per turn during the play cards phase. Action cards have an ability that can be played on bases or minions until discarded. Use your cards not only to smash the bases, but to defeat other characters and earn the most victory points!

Learn how to play Smash Up below:

How to play Smash Up

Be the first to review “Smash Up” Cancel reply 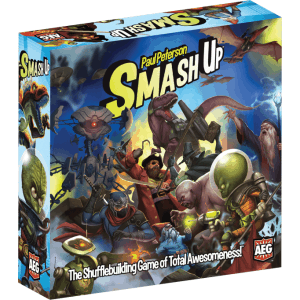 You're viewing: Smash Up £25.20
Add to basket
We use cookies on our website to give you the most relevant experience by remembering your preferences and repeat visits. By clicking “Accept”, you consent to the use of ALL the cookies.
Cookie settingsACCEPT
Manage consent