Compete against players to take control of a world that is simply too small. Race to gain control of regions and push your competitors off the face of the earth to win!

Small World is a race for 2-5 players aged 8 years and over to take control of regions. Numbers of rounds is based on the number of players and could last up to 90 minutes. Each player will claim their territory using race tokens which score victory points. Eventually, the small world will become full, and players will have to send their race into decline and start a new race.

The fantasy small world includes dwarves, wizards, amazons, giants, and orcs to help us humans build our empire. Rush to the finish line and the player with the most victory points will win!

How to Play Small World 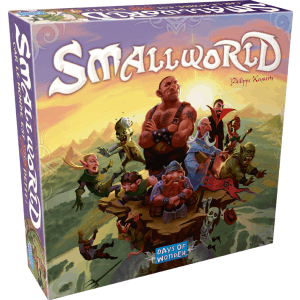 You're viewing: Small World £36.40
Add to basket
We use cookies on our website to give you the most relevant experience by remembering your preferences and repeat visits. By clicking “Accept”, you consent to the use of ALL the cookies.
Cookie settingsACCEPT
Manage consent