Armed with both a radium serpenta and a control stave is the senior officer Skitarii Marshall who is ready to command your army. Make the most out of each and every shot fired using just the presence of the Marshall and lead them to victory!

Command the Skitarii army with the senior officer Skitarii Marshall who will boost the efficiency of nearby units. Specialised in directing troops, he will command their every move to ensure they make the most out of every shot. Skitarii Rangers are relentless hunter-killers who will stop at nothing to destroy their enemy, even if they have to stalk across galaxies for decades to come.

Warhammer 40k Adeptus Mechanicus are manufactures of technology who worship the Machine God. They regard organic flesh to be weak and will replace the biological tissue with mechanical parts, eventually making them more machine than man. Warriors of the Skitarii Legions are considered to be human but seek to grow close to their God and use each and every wound as another chance for bionic revelation. They follow a unique religion known as the Cult Mechanicus which features a symbol of a skull, half-bone and half-machine.

Bring your miniature to life by using the Citadel Colour System that comes with a huge variety of colours designed specifically for Warhammer. Adeptus Mechanicus miniatures are very detailed and require you to get creative as you begin to paint their incredible weapons and mechanical parts. Once painted they are ready to battle for the Armies of the Imperium in Warhammer 40K!

In need of a suitable commander? The Skitarii Marshall is the perfect choice, unleash their power and command the war machines of the 41st Millennium! 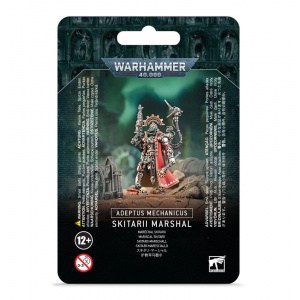 You're viewing: Skitarii Marshall (Adeptus Mechanicus) £12.95
Add to basket
We use cookies on our website to give you the most relevant experience by remembering your preferences and repeat visits. By clicking “Accept”, you consent to the use of ALL the cookies.
Cookie settingsACCEPT
Manage consent