Take the race for controlling Europa to the skies in this expansion! Scythe: The Wind Gambit introduces both airships and resolution tiles to improve gameplay.

Scythe The Wind Gambit is an expansion where 1-7 players aged 14 years or over will take the race to the skies.

For a long time mankind has been confined to travel by just land and sea. Now a new technology has emerged in Eastern Europa, known as airships.

This expansion includes airships that never control territories and are moved using the move action. They also have two abilities known as aggressive and passive. Resolution tiles have also been introduces as a new way to determining when and how the game will end!

In games of Scythe, each player will begin with different resources such as coins, power and popularity. Starting positions are given depending on the faction uniqueness and the nature of the game.

Players almost have full control over their fate, the only elements of luck are through encounter cards which players will draw when they interact with citizens of newly explored lands.

Players have the option to upgrade their actions to become more efficient, build structures, enlist new recruit, activate mechs and expand their borders. This will create a sense of progress throughout the game and adds a unique feel to each game, even when playing the same faction multiple times.

Find the full list of game components for Scythe The Wind Gambit below: 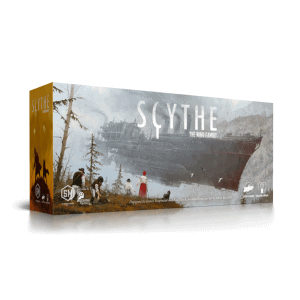 You're viewing: Scythe The Wind Gambit Expansion £16.95
Add to basket
We use cookies on our website to give you the most relevant experience by remembering your preferences and repeat visits. By clicking “Accept”, you consent to the use of ALL the cookies.
Cookie settingsACCEPT
Manage consent