Scythe travels players back to the 1920’s to play in a time of farming and war. Build structures, recruit, deploy and expand borders as you lead factions to power.

Scythe is a board game where 1-5 players aged 14 years and over will conquer, recruit and build. Control your fate as you progress throughout the game by using unique abilities and upgrading actions.

Lasting around 2 hours per game, players must rebuild the country and claim any territories left after the war. Players will choose different countries to play within Europe and compete for the victory points needed to win. The game will end when a player has placed their sixth star on their economy board. All players will then total up their scores and the highest will win!

Simplified rules on how to play Scythe can be found below:

Below is a full list of game components for Scythe:

Be the first to review “Scythe” Cancel reply 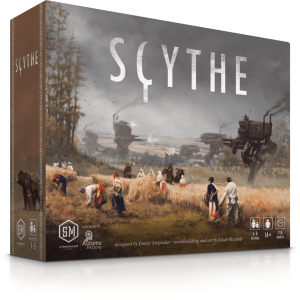 You're viewing: Scythe £54.90
Add to basket
We use cookies on our website to give you the most relevant experience by remembering your preferences and repeat visits. By clicking “Accept”, you consent to the use of ALL the cookies.
Cookie settingsACCEPT
Manage consent