This kit contains the components required to assemble one Scribbus Wretch, the Tallyman. With his sole purpose being to kill and spread diseases this miniature makes a great addition to the Death Guard chapter!

This multi-part plastic kit contains the necessary parts to assemble one Scribbus Wretch, a Death Guard Tallyman. This particularly unpleasant model has a morbid focus on keeping record cataloguing misfortune. The miniature is seem carrying a ream of paper on his clipboard in the crook in his left with a bone type stylus in his right to add up his tallies. A strange apparatus is shown hanging from his back,  which ends in a tentacle that grasps skulls. His standard Death Guard armour is covered in corrosion, boils and the Nurgle icons and alongside him is a Nurgling who is busy carrying extra ink and paper. Scribbus Wretch is displayed atop a pile of books that are likely full of atrocities written by him.

Warhammer 40k Death Guard, also known as the Dusk Raiders, form part of the traitor legions of Chaos Space Marines. The once loyal followers of the Emperor were corrupted and now worship the Plague God Nurgle. The plague-ridden marines now just rot away within their power armour, immune to all injuries leaving them with nothing to do but slay other warriors. Death Guard armies will spread their diseases across the galaxy and condemn others to their same fate, eternal decay.

Be the first to review “Scribbus Wretch, the Tallyman (Death Guard)” Cancel reply 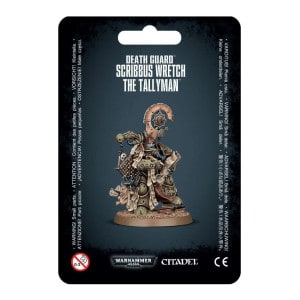 You're viewing: Scribbus Wretch, the Tallyman (Death Guard) £14.02
Add to basket
We use cookies on our website to give you the most relevant experience by remembering your preferences and repeat visits. By clicking “Accept”, you consent to the use of ALL the cookies.
Cookie settingsACCEPT
Manage consent