Scions Of The Emperor: An Anthology (Hardback)

The primarchs, demigod scions of the Emperor, wage war and explore their destinies in eight tales from the universe of the bestselling Horus Heresy series.

DESCRIPTION
From their shadowed origins to the desperate battles that ensued when half of them rebelled against their father, the Sons of the Emperor – the vaunted primarchs – were among the greatest of humanity’s champions. They were warriors without peer and heroes whose deeds became legend. From a tale of Ferrus Manus in his earliest days to mysterious murders that lead Rogal Dorn into peril on the eve of the Siege of Terra, the eight tales in this volume lay bare key moments in the lives of these mighty heroes.

READ IT BECAUSE
Discover key moments in the lives of the primarchs across eight short stories, from their earliest days to the tense times in the lead-up to the Siege of Terra.

Be the first to review “Scions Of The Emperor: An Anthology (Hardback)” Cancel reply 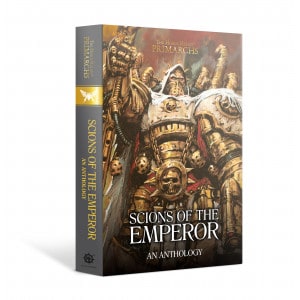 You're viewing: Scions Of The Emperor: An Anthology (Hardback) £12.15
Add to basket
We use cookies on our website to give you the most relevant experience by remembering your preferences and repeat visits. By clicking “Accept”, you consent to the use of ALL the cookies.
Cookie settingsACCEPT
Manage consent