This Saruman The White & Grima set contains The wizard of Orthanc and his servant. They make a great combination of sorcery and corruption influence for any evil army!

Saruman The White & Grima make a great combination of both corrupting influence and sorcery on the battlefield. The evil pair perfectly compliment the brutality of the Uruk-hai as they lead them to help Sauron in his mission to rule the Middle-earth.

Once the head of the White Council, Saruman was corrupted by the Dark Lord’s powers as he looked into the Palantír of Orthanc. Doing so saw him stripped of his nobility and building an army which will rival the Dark Lord’s own. It is unknown what Saruman hoped to gain from his betrayal, but he used all his magical knowledge against former friend Gandalf the Grey and cause the deaths of thousands by fire and sword.

Gríma, a man of Rohan, made a deal with Saruman and exchanged his services for promised wealth and power. This despicable act saw him gain access to the services of King Théoden where he caused great harm. Gríma’s strengths now consist of his ability to twist both words and thoughts of those surrounding him and robbing them of their heroism.

This set contains Saruman both on foot and mounted as well as Gríma Wormtongue and Palantír. Rules for these miniatures will be found in Armies of The Lord of the Rings.

Find the full list of components for Saruman The White and Grima below:

Be the first to review “Saruman The White & Grima” Cancel reply 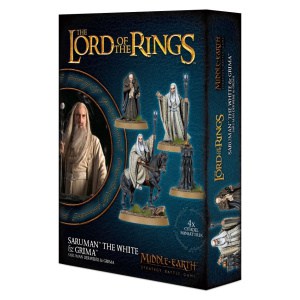 You're viewing: Saruman The White & Grima £19.95
Add to basket
We use cookies on our website to give you the most relevant experience by remembering your preferences and repeat visits. By clicking “Accept”, you consent to the use of ALL the cookies.
Cookie settingsACCEPT
Manage consent