Sagrada is a game where players can build colourful stained-glass windows using transparent dice. Players aged 13 years or over can join up to another 3 players for around 30 minutes of window crafting.

For each round two dice will be given to each player, plus one die. For example, if you have three players that will be seven dice. These dice will be rolled and players will choose one to add to their window. A new die must be placed adjacent to previously placed dice (orthogonally or diagonally) and no dice of the same value or colour can be placed orthogonally adjacent to each other.

The player with the most points after 10 round of the game will become the winner!

Below is an overview of how to play Sagrada:

Components included with the game are listed below:

Be the first to review “Sagrada” Cancel reply 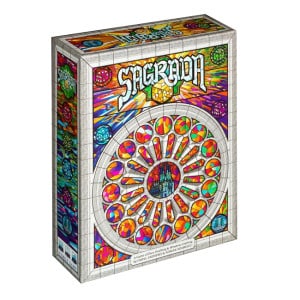 You're viewing: Sagrada £27.00
Add to basket
We use cookies on our website to give you the most relevant experience by remembering your preferences and repeat visits. By clicking “Accept”, you consent to the use of ALL the cookies.
Cookie settingsACCEPT
Manage consent