Supporting the Dark Angels as they battle trauma-scarred t’au, Lieutenant Farren and his Primaris Marines discover their allies have many secrets they’ll do anything to conceal…

READ IT BECAUSE
We’ve all been dying to know what happens when the Primaris Space Marines and Dark Angels finally meet – and now that story is finally here.

THE STORY
Lieutenant Xedro Farren is a Primaris Marine, stronger and more adept than even the Space Marines his brotherhood is sent to fight alongside. As the Dark Angels and the Primaris Marines fight a trauma-scarred force of T’au hellbent on destroying their former allies, the true quarry becomes clear – the shadowy instigator of a psychic curse that could plunge a string of Imperial planets into madness. As worlds burn in the fires of battle, an unthinkable pact is struck, with the Primaris Marines peeling back layer after layer of deceit to find the appalling truth. Can Farren hope to emerge from this web of lies without losing his honour – or come to that, his life?

Be the first to review “War Of Secrets (Paperback)” Cancel reply 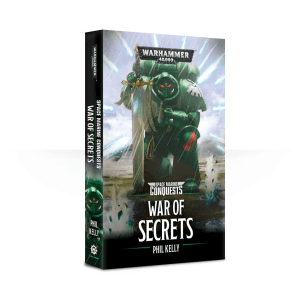 You're viewing: War Of Secrets (Paperback) £7.28
Add to basket
We use cookies on our website to give you the most relevant experience by remembering your preferences and repeat visits. By clicking “Accept”, you consent to the use of ALL the cookies.
Cookie settingsACCEPT
Manage consent