Rohan has seen much war and turmoil in its relatively brief history, and many watchtowers and small forts have been erected across the Riddermark to warn and protect its people from attack.

This modular, multipart plastic terrain kit enables you to build one Rohan Watchtower, 4 Palisades and a gate. Each Palisade includes a walkway that is 25mm wide to accommodate archers or other infantry manning the walls. The Palisade gate can be assembled to open or close freely and can hold a removable crossbeam with which the defenders can lock the gate.

This set includes the parts to build the following terrain elements: 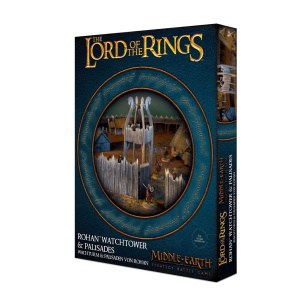 You're viewing: Rohan Watchtower & Palisades (Middle Earth Strategy Battle Game) £35.73
Add to basket
We use cookies on our website to give you the most relevant experience by remembering your preferences and repeat visits. By clicking “Accept”, you consent to the use of ALL the cookies.
Cookie settingsACCEPT
Manage consent