Rising Sun is a game about negotiation and warfare in Japan, where the ancient gods have returned. The control is in your hands as you seek alliances and lead your clan to victory.

Rising Sun is a board game for 3-5 players aged 14 years and over. The successor to Blood Rage focuses on negotiations, alliances, and war. Worship the Kami and lead your clan to victory as you seek profitable alliances and use politics to your advantage.

Each player will have their own clan with its own unique power along with a series of miniatures, distinguishable by their colour bases. Rising Sun plays out over 4 rounds knows as seasons, with some providing special abilities.

Use your resources wisely as you battle it out to gain victory points. Concentrate on your competition as the player with the most points at the end of the winter season will be the announced winner!

Below we have provided a brief overview of the different type of seasons:

Be the first to review “Rising Sun” Cancel reply 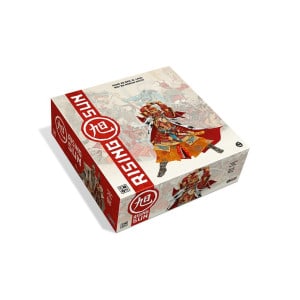 You're viewing: Rising Sun £64.00
Add to basket
We use cookies on our website to give you the most relevant experience by remembering your preferences and repeat visits. By clicking “Accept”, you consent to the use of ALL the cookies.
Cookie settingsACCEPT
Manage consent