Command your Soulblight Gravelords with Radukar The Beast, a terrifying predator ready to tear through his enemies. Accompanied by a pair of Vyrkos Blood-Born he aims to feast on his enemies and gather survivors to join him on his mission to destroy.

Radukar suffered greatly from the events of the Necroquake and has since become infused with rage. The once legendary warrior has now begun a murderous rampage and is determined to destroy all in his path. This included Wolf Vilnas, who he killed with his bare hands to secure the blood kiss and gain power. Those who dare challenge or defy him will be greeted by his fury and need to kill.

Radukar The Beast is accompanied by a pair of murderous Vyrkos Blood-Born minions armed with sharp blades. These surviving nobles were given the opportunity to join the Grand Alliance of Death in exchange for their loyalty and the blood kiss. They live to serve and will assassinate those who question his power as they stalk to find prey.

Soulblight Gravelords consist of Vampires, Zombies and Skeletons who all work together and follow the commands of leader Nagash. The Grand Alliance of Death are on a mission to take over and impose the order of the dead by killing all who live and forcing them to join battle.

Prime your new miniature ready for battles of Warhammer Age of Sigmar using the incredible Citadel Colour System. Get creative and choose from a wide variety of water-based colours which have been designed and improved over time specifically for Warhammer painting. Once painted, Radukar the Beast is ready to command the Soulblight Gravelords as a Vampire Lord and take over the Mortal Realms! 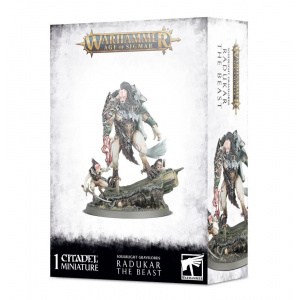 You're viewing: Radukar The Beast (Soulblight Gravelords) £25.14
Add to basket
We use cookies on our website to give you the most relevant experience by remembering your preferences and repeat visits. By clicking “Accept”, you consent to the use of ALL the cookies.
Cookie settingsACCEPT
Manage consent