Taken prisoner by orks and forced to build an effigy to their alien gods, Marcus van Veenan plots his escape, for the Imperium must be warned of the growing greenskin threat.

READ IT BECAUSE
See what life’s like for humans enslaved by orks, and to what lengths one Astra Militarum Guardsman will go in order to escape and warn the Imperium about the greenskins.

THE STORY
Marcus van Veenan thought he’d finally found a quiet posting to see out his career in the Astra Militarum. But when the planet of Rotauri falls to the green tide of warboss ’Eadbasha’s ork invasion, van Veenan and several hundred Guardsmen are taken prisoner by the greenskins and forced to construct a bizarre, colossal ork effigy.

With the fate of the regiment in his hands, van Veenan reluctantly sets about leading a daring breakout to escape the prison camp and warn the Imperium of the growing Waaagh!.

Be the first to review “Prisoners Of Waaagh! (Hardback)” Cancel reply 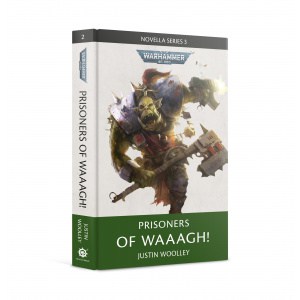 You're viewing: Prisoners Of Waaagh! (Hardback) £4.76
Add to basket
We use cookies on our website to give you the most relevant experience by remembering your preferences and repeat visits. By clicking “Accept”, you consent to the use of ALL the cookies.
Cookie settingsACCEPT
Manage consent