The Black Templars have previously fielded the Crusader Squads as their rank and file, accompanied into battle by the Neophytes eager for front-line experience. This is the same for the Primaris Crusader Squads, an extremely powerful Troops choice which is capable of absorbing massive punishment all while charging at their foe!

Infused with the might of the Primaris miracle, the Primaris Crusader Squad storm their way into battle with their bolt rifles blazing and Astartes chainswords at the ready. Lead by the Veteran Sword Brother, Crusader Squads mix in the brand new Primaris Initiates with Neophytes to test their skills. Like most of the Black Templars squads, they are well equipped with a wide range of both melee and ranged weapons.

Warhammer 40k Black Templars derived from the primarch Rogal Dorn and form a Loyalist Second Founding Space Marine Chapter. Their origins trace all the way back to the Imperial Fists’ defence of Terra throughout the Horus Heresy. They are known for being zealous crusaders and holy warriors, battling to bring both the truth and light of the Emperor to all unconquered worlds throughout the galaxy.

We highly recommend using both the Citadel Plastic Glue and Colour System to assemble your new squad! 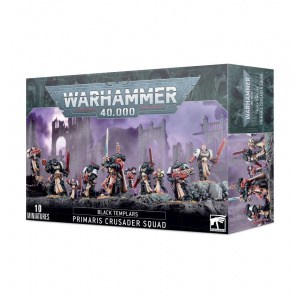 You're viewing: Primaris Crusader Squad (Black Templars) £28.98
Add to basket
We use cookies on our website to give you the most relevant experience by remembering your preferences and repeat visits. By clicking “Accept”, you consent to the use of ALL the cookies.
Cookie settingsACCEPT
Manage consent