While crusading to build the Imperium, Perturabo, mercurial primarch of the Iron Warriors, hears of turmoil on the world where he was raised, and abandons the crusade to return home and save his people.

READ IT BECAUSE
Focusing on Perturabo during his youth on Olympia, in the Great Crusade and upon his return to the world that defined him, this is a definitive look at what makes the master of iron tick.

THE STORY
Born to a life of political conflict, Perturabo was always considered a child prodigy among the people of Olympia – indeed, his philosophical and scientific works were beyond compare. But then, after his rediscovery by the Emperor and decades of thankless military campaigning on the Great Crusade, the primarch begins to resent his Legion’s place in the Imperium. When word reaches him of turmoil on his adoptive home world, he orders the Iron Warriors to abandon their campaign against the alien hrud and crush this emerging rebellion by any means necessary…

Be the first to review “Primarchs: Perturabo” Cancel reply 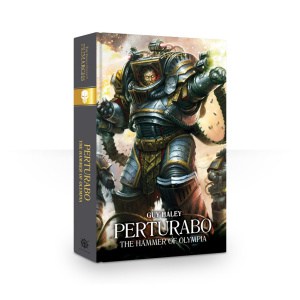 You're viewing: Primarchs: Perturabo £10.52
Add to basket
We use cookies on our website to give you the most relevant experience by remembering your preferences and repeat visits. By clicking “Accept”, you consent to the use of ALL the cookies.
Cookie settingsACCEPT
Manage consent