When a dread bio-weapon is unleashed in battle, turning allies upon one another, it falls to Corax and his Raven Guard to save the day – if he can balance his thirst for vengeance against the need for swift victory.

READ IT BECAUSE
We’ve seen Corax consumed with revenge throughout the Horus Heresy – now is our opportunity to see him before his brush with Chaos, heroically saving a campaign during the Great Crusade.

THE STORY
During the Great Crusade, it falls to the primarch Corax of the Raven Guard to humble the immense void-cities of the Carinae. Determined to bring these worlds into compliance, he unleashes the might of his Legion and a massive war host of the Imperial Army. But the lords of Carinae are well defended and without remorse.

At the height of the conflict, at the void-city of Zenith, a dread bio-weapon from an ancient time is unleashed. At once, the Imperial force is brought to its knees, as allies are turned against each other and the Raven Guard left to face almost insurmountable odds. As the campaign teeters on the brink of failure, Corax’s desire for vengeance is severely tested against the need for a swift and certain resolution to the war.

Be the first to review “Primarchs: Corax Lord Of Shadows (Hardback)” Cancel reply 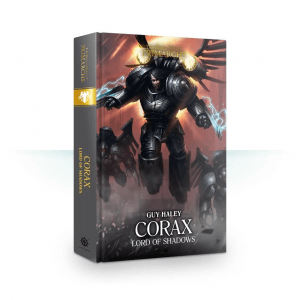 You're viewing: Primarchs: Corax Lord Of Shadows (Hardback) £10.52
Add to basket
We use cookies on our website to give you the most relevant experience by remembering your preferences and repeat visits. By clicking “Accept”, you consent to the use of ALL the cookies.
Cookie settingsACCEPT
Manage consent