This kit contains all the necessary components to assemble the Plague Marine Champion. Including a variety of head options as well as two Nurglings!

This multi-part plastic kit contains the required components to assemble the Plague Marine Champion. Clad in rusted power armour, he has a choice of two heads, one helmeted and one bare. His cloak features the symbol of Nurgle and he is armed with a plaguesword, power fist and a boltgun which is seen hanging from his backpack. This set also includes two Nurglings with one atop his shoulder and the other on his base, clad in a Death Guard helmet.

The Plague Marines are sworn to the Nurgle’s service and are well known for their rotting bodies that stink of decay. Slime oozes from all their sores, corroding their armour and boiling away their skin. Despite all this, they are known for being fearsome warriors. Their brains are immune to any pain caused by battle wounds as they constantly suffer bodily corruption.

The Warhammer 40k Death Guard, also referred to as the Dusk Raiders, form part of the traitor legions of Chaos Space Marines. The once loyal followers of the Emperor were corrupted by the Plague God Nurgle. They now slowly rot away within their power armour, with immunity to all injuries during battle.

We highly recommend using the Citadel Plastic Glue and Paints to bring your hideous minaiture to life. Discover the incredible range of Citadel paints which have all been designed specifically for Warhammer painting. Once primed and ready, introduce your new miniature to future battles of Warhammer 40k! 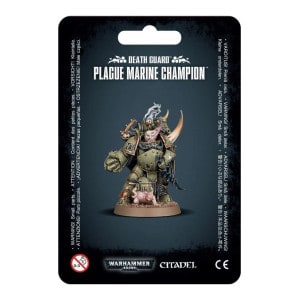 You're viewing: Plague Marine Champion (Death Guard) £12.25
Add to basket
We use cookies on our website to give you the most relevant experience by remembering your preferences and repeat visits. By clicking “Accept”, you consent to the use of ALL the cookies.
Cookie settingsACCEPT
Manage consent