Patchwork Express is a competitive game where two players will race to build the best patchwork quilt. The player with the highest amount of buttons will win the game!

Patchwork Express is a board game where 2 players aged 6 years or over will create a quilt and race to become the button master. This game features the same gameplay as the original Patchwork game, just with a smaller playing area and less complicated pieces.

Patchwork is a popular tile-laying game that was released in 2014 and designed by Uwe Rosenberg. The game will have you making tactical decisions as you compete to become the button master!

During a players turn they will can advance their piece to receive buttons or take a piece. Every piece will have a cost to it and needs arranging carefully to stop any gaps from appearing.

There are six patches to pick up throughout the game as well as extra pieces that will be introduced later in the game so players can fill up gaps in their quilt. However, the race is on as your opponent many get them first.

The player with the highest amount of buttons and the greatest patchwork quilt at the end of the game wins!

Find the full list of game components for Patchwork Express below:

Be the first to review “Patchwork Express” Cancel reply 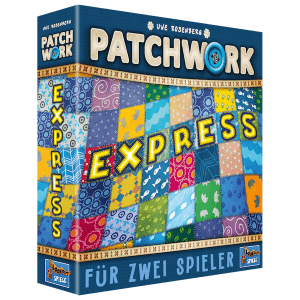 You're viewing: Patchwork Express £13.44
Add to basket
We use cookies on our website to give you the most relevant experience by remembering your preferences and repeat visits. By clicking “Accept”, you consent to the use of ALL the cookies.
Cookie settingsACCEPT
Manage consent