Compete against another player to build the best patchwork quilt in this tile-laying game. Players will have to choose and pay for buttons as they compete to become the button master!

Patchwork is a board game where 2 players aged 8 years and over will piece together a quilt and compete to become the button master!

This tile-laying game pits two players against each other as they compete to create the best patchwork quilt. Tiles are a mixture of all sorts of shapes and sizes which players will have to pay for using buttons.

In this beloved game designed by Uwe Rosenberg only one player will become the button master!

In games of Patchwork, players will take it in turns to either purchase one patch or pass. Purchase a patch by paying the cost in buttons, moving the spool and adding the patch to the game board. If a player chooses to pass, they will move their time token and take one button for each space they moved.

The first player to fill in a 7×7 square on their game board will earn a bonus tile at the end of the game. Once both players have reached the centre the game will end and scores are added. Each player will score one point for every button in their possession and lose two points for every empty square on their game board. The player with the highest amount of points is the winner!

Find the full list of game components for Patchwork below:

Be the first to review “Patchwork” Cancel reply 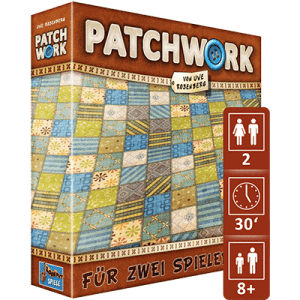 You're viewing: Patchwork £15.38
Add to basket
We use cookies on our website to give you the most relevant experience by remembering your preferences and repeat visits. By clicking “Accept”, you consent to the use of ALL the cookies.
Cookie settingsACCEPT
Manage consent