Introduce elite fighters to your Adepta Sororitas army and enter Warhammer 40k battles with incredible Paragon Warsuits. Choose from multiple weapons and fight against all challenges on the battlefield with great protection!

Paragon Warsuits are saved for the privileged only and require a pilot with great skill and faith to work effectively. The machines thick armour will protect the pilot from harm as they tackle any challenge they come across on the battlefield. Warsuits carry heavy firepower and close-combat weapons with a choice of either a sword or mace. Those capable of mastering the art will be able to go up against some of the largest foes of the Imperium and win victory.

Warhammer 40k Adepta Sororitas, also known as Sisters of Battle, are female warriors dedicated to the God-Emperor of Mankind. They are divided into Holy Orders and will be heard loudly proclaiming their faith in hymn as they march to war. Their four main divisions are known as Orders Militant, Orders Famulous, Orders Hospitaller and Orders Dialogous. The sisters of battle will transfer between these orders when injured or becoming old with age. Armed with a wide array of lethal weapons, the Sororitas are greatly feared and considered to be some of the Imperium’s finest warriors.

Assemble the Warsuits with the following components: 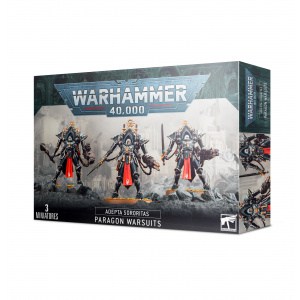 You're viewing: Paragon Warsuits (Adepta Sororitas) £33.11
Add to basket
We use cookies on our website to give you the most relevant experience by remembering your preferences and repeat visits. By clicking “Accept”, you consent to the use of ALL the cookies.
Cookie settingsACCEPT
Manage consent