Tired of trying to defeat diseases? Well, you will now play as the disease which has no cure! Pandemic Contagion is a standalone game where players will compete as diseases to eliminate all humanity.

Pandemic Contagion is a cooperative board game where 2-5 players aged 14 years or over will compete as diseases to eliminate humanity.

After years of trying to overcome diseases that threaten the existence of mankind, it is now your turn to become the disease that has no cure. Players will compete against other diseases in a competition to eliminate humanity. Without a cure, the player that wipes out all human civilisation first will be the deadliest disease ever known and win the game!

Pandemic Contagion is a standalone game and not an expansion to Pandemic.

The game plays in turns and players will take two of three actions including drawing cards, advancing mutation levels and spreading the disease.

Wipe out any cities that contain a number of diseases equal to the city’s population. The player who places the final disease will earn a special action. The player with the highest amount of diseases will score the population number. Last but not least, award the two smaller numbers to the remaining players.

Disease cards feature three mutations known as Incubation, Transmission and Resistance. Players can advance a mutation level when discarding cards. Draw event cards at the start of each round, these will affect every player during their turn. WHO cards are considered as bad cards, but resistance will lessen whatever the penalty you receive.

Once the card decks run out or there is only two city cards remaining, the game will come to an end and the winner is announced!

Find the full list of game components for Pandemic Contagion below: 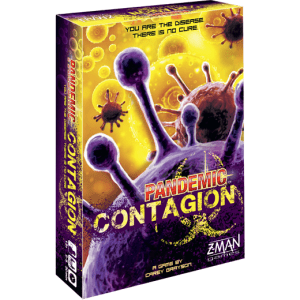 You're viewing: Pandemic: Contagion £21.40
Add to basket
We use cookies on our website to give you the most relevant experience by remembering your preferences and repeat visits. By clicking “Accept”, you consent to the use of ALL the cookies.
Cookie settingsACCEPT
Manage consent