Bring an excellent commander to your Adepta Sororitas army with the incredible Palatine. Direct the attacks of comrades and lead them to battle with this HQ choice for your Battle Sisters!

Palatine is an efficient support character who will direct attacks of her Adepta Sororitas members. They make great lieutenants in larger armies and commanders of small armies as they will lead the sisters to battle. Armed with a Plasma Pistol and Power Sword, she is able to defend herself well and deliver retribution up close. The talented sister has been tested through the ranks and will work alongside Inquisitors and Astra Militarum generals to fight for humanity.

Warhammer 40k Adepta Sororitas, also known as Sisters of Battle, are trained and dedicated warriors who worship the God-Emperor of Mankind. They fight with the Armies of the Imperium and loudly proclaim their faith in hymn as they march to war. The Battle Sisters represent some of the finest warriors and are known for being split into four main divisions known as the Orders Hospitaller, Orders Famulous, Orders Militant and Orders Dialogous. Members of the Adepta Sororitas transfer through these divisions due to reasons such as age and injuries.

Bring your Palatine to life using the Citadel Colour System. Once assembled, decide what is your preferred painting method and chose from a wide range paints designed specifically for Warhammer miniatures. Unleash you creativity and introduce this spectacular miniature to your future Warhammer 40k battles!

Be the first to review “Palatine (Adepta Sororitas)” Cancel reply 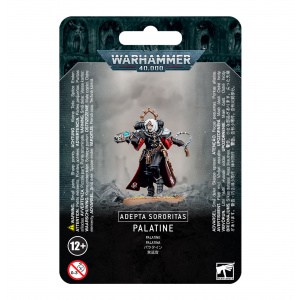 You're viewing: Palatine (Adepta Sororitas) £16.67
Add to basket
We use cookies on our website to give you the most relevant experience by remembering your preferences and repeat visits. By clicking “Accept”, you consent to the use of ALL the cookies.
Cookie settingsACCEPT
Manage consent