Finally bring brutal justice to the famous underhive with this Palanite Subjugator Patrol set. Players can now law down the law using heavy duty weaponry and customise their miniatures with a huge variety of options!

Palanite Subjugator Patrol are well known for delivering justice but they do so with extreme prejudice. They resemble more of an army than a police force and will rid of those who commit even the smallest crimes.

This set has been designed to provide both variety and options when assembling the six miniatures, this helps ensure that no two patrols will look the same. This kit is great way to start a new patrol or even provide reinforcements for existing ones. The set also includes the option to build a Subjugator Captain, as well as weapons including stub guns, shock batons, subjugation pattern grenade launchers, SLHG pattern assault rams and vigilance pattern assault shields.

Warhammer 40k Necromunda is a tabletop wargame that allows players to control the gangs found in the crime-ridden underhive. Gain experience, equipment and members as you fight within the heavily polluted environments where daylight doesn’t exist. The planet of Necromunda consists of both factories and mines which were founded during the Dark Age of Technology. The undercities found here contain nothing but fights, usually resulting in death.

Rules for the Subjagator Patrol will be found in Necromunda: The Book of Justice or Necromunda: Dark Uprising.

Find the full list of components for the Palanite Subjugator Patrol below: 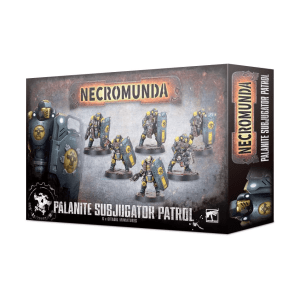 You're viewing: Palanite Subjugator Patrol (Necromunda) £20.64
Add to basket
We use cookies on our website to give you the most relevant experience by remembering your preferences and repeat visits. By clicking “Accept”, you consent to the use of ALL the cookies.
Cookie settingsACCEPT
Manage consent