This kit contains the components to assemble the Marshcrawla Sloggoth, a gruesome Behemoth which is ridden by sneak grots. Including a variety of options to customise both the Sloggoth and riders!

This kit contains the components to assemble Marshcrawla Sloggoth, the distant relatives to the troggoths often found in caves and mountains.  The Marshcrawla Sloggoths are known for being slow and patient hunters which feature long, grasping limbs to grab their unsuspecting victims from the burrows below. The grots found in the Kruleboy society take advantage and ride these shambling beasts into Age of Sigmar battles, by strapping howdahs to their backs and attacking the enemy using both snatcha-stikks and catcha nets.

Though their primary concern is to capture both beasts and bodies as amusement for the Kruleboyz, the crew will also hammer out rhythms which mimics the hooves of Kragnos, the End of Empires. This drives the Orruks into a frenzy and the grot crews will instead steer the Sloggoths to grab vulnerable individuals.

Warhammer Age of Sigmar Orruk Warclans are followers of Gorkamorka and form part of the Grand Alliance of Destruction. The loud and brutal species are able to shake the Mortal Realms as they punch, smash and slash opponents with ease.

Orruks are known for being rather unintelligent, however they refuse to let this hold them back from crushing entire empires. They thrive from war and will use their numbers, strength and brutality to win battles. 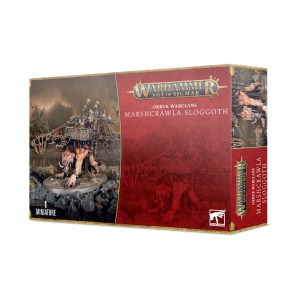 You're viewing: Marshcrawla Sloggoth (Orruk Warclans) £25.01
Add to basket
We use cookies on our website to give you the most relevant experience by remembering your preferences and repeat visits. By clicking “Accept”, you consent to the use of ALL the cookies.
Cookie settingsACCEPT
Manage consent