A favourite amongst Speed Freeks and grounded Flyboyz alike, Megatrakk Scrapjets provide rocket-propelled acceleration, impressive firepower and the hilarity of ramming into enemy lines at the helm of what is effectively a gigantic, thrust-driven drill. These vehicles allow former Ork pilots to revel in the dimly-remembered joy of mowing down enemies at point-blank range – a joy which, of course, often caused the Flyboy to crash in the first place. Explosions blossom amidst the enemy as rokkits and missiles collide with their targets, while Grot tail-gunners blaze away with chattering big shootas – the array of weaponry welded, bolted, riveted and lashed onto a Megatrakk Scrapjet is fearsome.

This multipart plastic kit contains the components necessary to assemble a Megatrakk Scrapjet. Built around the fuselage of a downed Ork aircraft, the Scrapjet is pretty much a metal tube covered in things that make enemies die – a front-mounted rokkit kannon (with belt-fed rokkits!), missiles which can be modelled mid-launch, a drill attached to the front turbine with accompanying spiked rams, a twin big shoota at the front and another twin big shoota crewed by a Grot rear gunner. While the wings have been broken off in whatever terrible accident grounded the Scrapjet, it’s still covered in fins and ailerons – after all, they look cool, and that’s what being a Flyboy is all about! The pilot himself is decked out in a flight jacket, goggles and a long scarf billowing out behind him, seated in a cockpit full of instruments (which he is, of course, ignoring). The Scrapjet is propelled by a huge jet exhaust at the back, which pushes the vehicle along via the tracked wheels attached to the rear.

This kit comes as 65 components and is supplied with a Citadel 150mm Oval base.

Be the first to review “Ork Megatrakk Scrapjet” Cancel reply 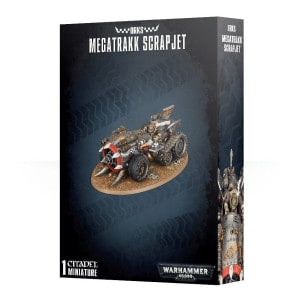 You're viewing: Ork Megatrakk Scrapjet £23.82
Add to basket
We use cookies on our website to give you the most relevant experience by remembering your preferences and repeat visits. By clicking “Accept”, you consent to the use of ALL the cookies.
Cookie settingsACCEPT
Manage consent