From the makers of One Night Ultimate Werewolf, we have a fast paced game full of secret identities. Re-enter the universe and figure out who is playing the roles of government informants!

One Night Revolution is a social game for 3-10 players aged 14 years or over. Players will receive ID tokens revealing their roles as either rebel fighters or government informants. Taking place in a single round, rebels are trying to identify who is playing as an informant to win the game. However, nobody has to be entirely truthful about their identification.

If any informants exist during the game, they will reveal themselves to each other during the night. All players will complete their specialist actions in secret in a clockwise order, actions could be anything such as switching roles and gathering information. At the end of the game, if the rebels catch out an informant they will win the game. On the other hand, if the rebels fail to reveal an informant then they will win instead!

Below you can find a brief overview on how to play One Night Revolution:

The game components for One Night Revolution are in a list below:

Be the first to review “One Night Revolution” Cancel reply 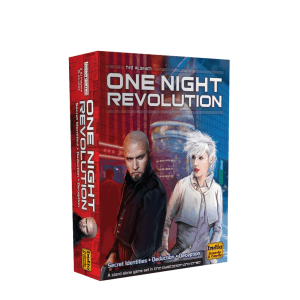 You're viewing: One Night Revolution £5.27
Add to basket
We use cookies on our website to give you the most relevant experience by remembering your preferences and repeat visits. By clicking “Accept”, you consent to the use of ALL the cookies.
Cookie settingsACCEPT
Manage consent