On A Scale of One to T-Rex

Perform ridiculous and hilarious actions in On a Scale of One to T-Rex. If you are no good at acting to play charades, this is the game for you. Simply get other players to guess the intensity level of your acting instead!

On a Scale of One to T-Rex is a family party game for all players aged 7 or above. Bring entertainment to the party as 2-8 players perform crazy actions such as: pretend the floor is lava, be a rooster and even acting like a T-Rex!

Each player will be given both an action and intensity card. Your action card is revealed to all players so acting skills are not necessary. However, the intensity card remains your secret. On a scale of 1-10, with 10 being the highest intensity, you will receive a number that states how intense you should make your action. This 15 minute game is certain to bring lots of laughter for all the family as you all perform at the same time.

After the performance, try and figure out if any other players have the same number as you.  If the numbers match, you score points!

On a Scale of One to T-Rex Gameplay

On a Scale of One to T-Rex, we score a 10 on being extremely easy to learn and play:

Find the components for this game listed below:

How to Play On a Scale of One to T-Rex 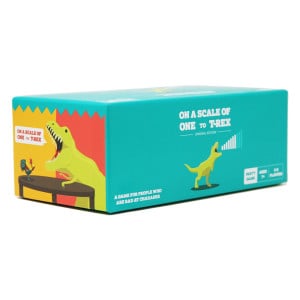 You're viewing: On A Scale of One to T-Rex £15.95
Add to basket
We use cookies on our website to give you the most relevant experience by remembering your preferences and repeat visits. By clicking “Accept”, you consent to the use of ALL the cookies.
Cookie settingsACCEPT
Manage consent