Continue the Octarius Campaign with the new Book 2: Critical Mass! Including Updates Index Rules, Legendary Missions, Relics, Campaign Rules and so much more.

Octarius Book 2: Critical Mass is a 96-page hardback book containing all the information about the conclusion to War Zone Octarius.

The Hive Fleet Leviathan approaches the Octarius sector’s heart, all while the forge world of Sigma-Ulstari is fighting for its life against multiple xenos invasions. As desperation grows and the grim fate of billions hangs above them, forces from all sides gather their deadliest weapons and get ready for the Octarian War’s apocalyptic conclusion.

Warhammer 40k is the most successful tabletop wargame ever made. Find out why more and more players are joining the hobby every day by discovering the world of endless war in the far future. Endless battles are constantly fought between humanity, forces of chaos and the countless alien creatures that threaten the universe.

A copy of the Warhammer 40,000 Core Book is required to use the contents of this book. 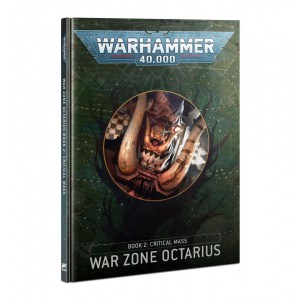 You're viewing: Critical Mass: Octarius Book 2 £23.82
Add to basket
We use cookies on our website to give you the most relevant experience by remembering your preferences and repeat visits. By clicking “Accept”, you consent to the use of ALL the cookies.
Cookie settingsACCEPT
Manage consent