Bring all the family together in this mini travel party game to join in the fun with Obama and Tina (the Llama)!

Put your guessing skills to the test with the Obama Llama Game! Players aged 14 and over can invite 3 or more others to join in on 30 minutes of laughter per game. Once separated into teams of two, you will begin the card game by rolling your colour dice. The colour it lands on determines how you play. If the colour is pink, the player must ‘solve it’. Roll the colour is green, the player must ‘describe it’ to the rest of the team without saying the words given. If the colour is Yellow, they player must ‘act it’ by showing the name on the back to the team and acting out the other sides in silence, just like Charades!

How to play Obama Llama 2 Mini

Be the first to review “Obama Llama 2 Mini” Cancel reply 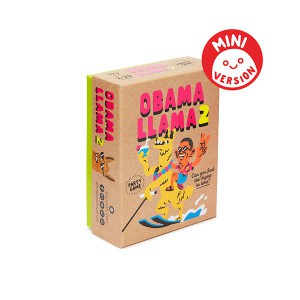 You're viewing: Obama Llama 2 Mini £8.50
Add to basket
We use cookies on our website to give you the most relevant experience by remembering your preferences and repeat visits. By clicking “Accept”, you consent to the use of ALL the cookies.
Cookie settingsACCEPT
Manage consent