Introduce the new and powerful shaman to Warhammer Age of Sigmar to lead your Kruleboyz Waaagh! This Gobsprakk The Mouth of Mork kit contains the required components, base and the option to assemble Killaboss on Corpse-rippa Vulcha.

This kit contains the components to assemble the mightiest of all the Swampcalla Shamans, Gobsprakk The Mouth Of Mork.  As a wielder of magic, Gobsprakk is able to command a Waaagh! using his unparalleled skill. His words usually come from the Twin-Headed God with his impressive orky charisma making him an ally of Kragnos, the End of Empires and earning him a direct line with two gods of Destruction.

During battle, Gobsprakk will takes to the skies with his Corpse-rippa Vulcha, Killabeak. He is able to bellow multiple commands to the Orruks whilst hurling hexes and spells to hinder and harm his foes.

Warhammer Age of Sigmar Orruks such as the Ironjawz are well known for being rather unintelligent, however the Orruks have never let this hold them back from crushing entire empires just for the fun and thrill of the fight. Thriving on war, they will use their great numbers, strength and brutality to help them win battles. Bonespitterz are also incredibly fast and live just to hunt and slay beasts, putting their bones on display to show their power.

We highly recommend using the Citadel Plastic Glue and Colour System to assemble your new miniature!

Gobsprakk The Mouth Of Mork Components 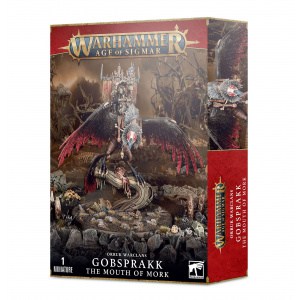 You're viewing: Gobsprakk The Mouth Of Mork (Orruk Warclans) £70.67
Add to basket
We use cookies on our website to give you the most relevant experience by remembering your preferences and repeat visits. By clicking “Accept”, you consent to the use of ALL the cookies.
Cookie settingsACCEPT
Manage consent