Take control of unique characters and try to survive an alien-infested spaceship in games of Nemesis! Beware, as other players may have different agendas in this fight for survival…

Nemesis is a board game where 1-5 players aged 12 years or over will fight to survive an alien-invested spaceship.

Players will take control of different characters all waking up with some serious problems. These problems include the hyper sleep fog which makes characters forget the layout of the ship, another being multiple warnings and a dead body.

Nemesis will take you through a game of sci-fi survival horror in all its horror. A soldier will fire blindly down a corridor in attempt to stop the alien advance. A scientist will race to find a solution in a makeshift lab. A traitor will steals the very last escape pod before other get chance. Intruders will react to noises and evolve as the time goes by. During the game, players will control one of these crew members which all have a unique set of skills, deck of cards, and starting equipment.

To win the games of Nemesis, players will have to complete one of the two objectives they were dealt at the start of the game and find a way back to Earth. There will be many obstacles such as swarms of Intruders, the ship poor condition, agendas of fellow players and possibly just cruel fate.

Find the full list of game components for Nemesis below:

Be the first to review “Nemesis” Cancel reply 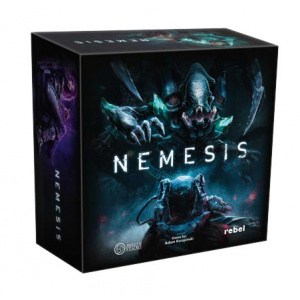 You're viewing: Nemesis £93.75
Add to basket
We use cookies on our website to give you the most relevant experience by remembering your preferences and repeat visits. By clicking “Accept”, you consent to the use of ALL the cookies.
Cookie settingsACCEPT
Manage consent