Looking to start your Necron army? This Necron Combat Patrol kit includes 15 key miniatures to get you started with battles of Warhammer 40k and save you money!

Necrons Combat Patrol is a kit that includes 15 key units designed to start the army or expand collections. Necrons are a xenos species that are awakening from their dormant tomb-worlds. The mysterious humanoid, robotic, skeletal warriors have now become ruthless killing machines determined to claim the Galaxy all over again. The former servants of the Star God have just one purpose, to reclaim their lands and reinforce their ancient ruling.

The Necron Overlord is one of the most powerful leaders of the species and is the ruler of tomb-worlds. Equipped with a Staff of Light, they formulate strategies and calculate all possible outcomes. Their robotic bodies are able to withstand anti-tank weaponry and crush their rivals.

Necron Immortals are shock proof giants that tower over Space Marines. Their transition to undying alien metal has stripped them of all weaknesses and deepened their hatred for all enemies. Protected by necrodermis armour, they can survive the impact of the Heavy Bolter or Assualt Cannon fire and make up for their lack of approach.

Tomb Blades are anti-gravitic void fighter and jetbike combinations that unleashes firepower. Its unpredictable nature and deadly speed creates danger as it targets enemy voidships and vehicles. The craft has no direct approach and will constantly move around to confuse the rivals and their aim.

The Night Scythe is a favoured tool that replaces heavy weaponry. The crafts are piloted by Necron Immortals that can perform multiple maneuvers at high speeds. Armed with twin-linked Tesla Destructors, the vehicle enters battle with a wormhole that is linked to a tomb-world to make up for its lack of transport department.

All miniatures included in this Necrons Combat Patrol set are supplied with their appropriate bases.

Be the first to review “Necrons Combat Patrol” Cancel reply 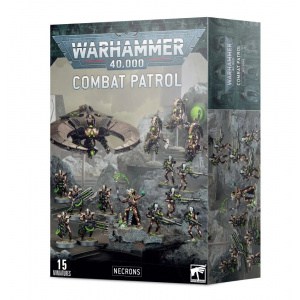 You're viewing: Necrons Combat Patrol £70.11
Add to basket
We use cookies on our website to give you the most relevant experience by remembering your preferences and repeat visits. By clicking “Accept”, you consent to the use of ALL the cookies.
Cookie settingsACCEPT
Manage consent