This Necron Warriors kit Includes two units , one Troops and one Fast Attack. These warriors are push-fit and can be built with a great choice of both head and weapon options!

This kit contains the components to assemble Necron Warriors, who form the majority of a tomb world’s armies. They are fleshless mechanoids, who range in the millions against vital races of the galaxy. Ancient limbs have corroded with age, but the strength of their metal sinews has not, nor has their loyalty to their Overlords.

Canoptek Scarab Swarms can be found throughout the tomb worlds and Necron spacecraft, where automated routines will compel them to break down damaged matter. They can feed on both organic and non-organic matter, converting it into energy that is re-routed into repair protocols.

Be the first to review “Necron Warriors” Cancel reply 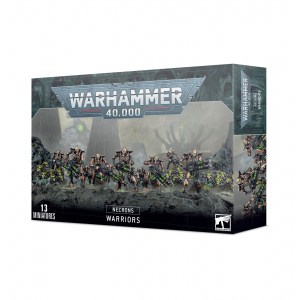 You're viewing: Necron Warriors £23.37
Add to basket
We use cookies on our website to give you the most relevant experience by remembering your preferences and repeat visits. By clicking “Accept”, you consent to the use of ALL the cookies.
Cookie settingsACCEPT
Manage consent