This kit contains all the components required to assemble the Catacomb Command Barge. Including Flying Stems, Appropriate Bases, Transfer Sheets, and more!

This Catacomb Command Barge is a striking model featuring Necron iconography and dynastic glyphs, making an impressive addition to your Necron collection. Including a scythe-like mid section, where the points of which surround two Necron minions who attend the control dashboard. Above them, stand a skeletal Necron Lord behind an elegant rail and gesturing forward his warscythe.

No one knows just how old the ancient dynasties of the Necrons are, but it is believed they are older than even the Eldar races. The Necrontyr were once a mighty empire and an independent race not unlike humanity, but after being deceived and all but destroyed by the ancient Gods known as the C’tan, they lost their organic forms and became the Necrons, an army of soulless, machine-like creatures.

Be the first to review “Catacomb Command Barge” Cancel reply 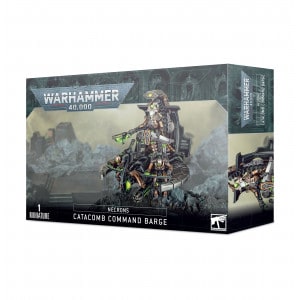 You're viewing: Catacomb Command Barge £25.32
Add to basket
We use cookies on our website to give you the most relevant experience by remembering your preferences and repeat visits. By clicking “Accept”, you consent to the use of ALL the cookies.
Cookie settingsACCEPT
Manage consent