Strengthen your gangs with these four Hive Scum miniatures or plot your revenge on major Houses of the Hive with an entire Outcast Gang. Miniatures are all armed with ramshackle weapons to help out the rest of your army by forming a gang of their own or joining house gangs.

Hive Scum are extremely easy to find and are often hired by established gangs in need of cheap bodies. They can also be found in fully fledged Outcasts gangs who go against the legendary Houses in a fight for territory, loot and more. Outcast Gangs of Necromunda are usually made up from the dregs of underhive society. These individuals will have freed themselves from social constraints in order to freely walk a dangerous and often short-lived path of nothing but risks and rewards.

Warhammer Necromunda is a tabletop war game where players will control gangs battling in the crime-ridden Underhive. The planet of Necromunda is a hive world of factories and mines founded during the Dark Age of Technology. This planet hosts the oldest undercities where they fight until death without ever witnessing daylight. Necromunda is played in a setting that resembles the hive city with a 3D tabletop layout including multiple story buildings and bridges!

We highly recommend using both the Citadel Plastic Glue and Colour System to assemble and bring your miniatures to life!

Be the first to review “Hive Scum” Cancel reply 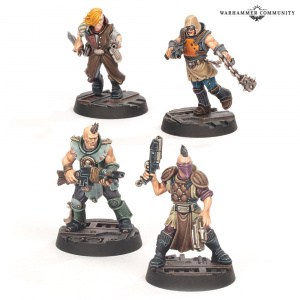 You're viewing: Hive Scum £9.53
Add to basket
We use cookies on our website to give you the most relevant experience by remembering your preferences and repeat visits. By clicking “Accept”, you consent to the use of ALL the cookies.
Cookie settingsACCEPT
Manage consent