Assemble your own Escher gang using this set of 10 plastic miniatures. The miniatures have been designed to provide you with huge amounts of variety and options when creating your unique gang made up entirely of women!

Escher Gang fight for House Escher, known for being unique among the Houses of Necromunda. This is because the gangs are made up of women that are masters of chemical manipulation. What they may lack in physical strength, is made up for in speed, skills and a sheer psychotic flair.

Warhammer 40k Necromunda is a tabletop war game based in the crime-ridden Underhive. Players will gain experience, members and equipment by controlling gangs as they fight in heavily polluted environment.

The hive world of both factories and mines was founded during the Dark Age of Technology and hosts the oldest undercities. Here they will fight until death without having ever witnessed daylight. Necromunda is played using a 3D tabletop layout that resembles the Hive City and features multiple story buildings and bridges.

Find the full list of components for Escher Gang below:

Be the first to review “Escher Gang (Necromunda)” Cancel reply 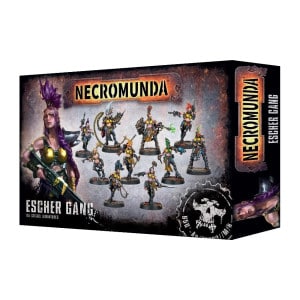 You're viewing: Escher Gang (Necromunda) £21.81
Add to basket
We use cookies on our website to give you the most relevant experience by remembering your preferences and repeat visits. By clicking “Accept”, you consent to the use of ALL the cookies.
Cookie settingsACCEPT
Manage consent