This Nauseous Rotbone kit contains the components required to assemble the Plague Surgeon. Including the appropriate base, bolt pistol, balesword and more!

This kit contains all the required multi-part plastic components to assemble Nauseous Rotbone, a Death Guard Plague Surgeon. He is armed with a bolt pistol and a balesword, but the real action lies in the medical instruments he carries. Narthecium-like instruments which contain horrific plagues will be found all over his armour as well as an ancient reductor used for stealing gene-seeds. Much of the armour is concealed by a cloak, however, the armour that is visible to the eye is covered in rust and corrosion, which is expected from a devotee of the Death Guard.

The hooded figure that once went out of his way to heal, not drifts through battle with the intention to kill. The touch of a Plague Surgeon is incredible infectious and those who dares to engage with them will be left crawling with disease. They also have the role of cracking open the bodies of the Adeptus Astartes and extracting their gene-seeds to create more Heretics.

The Warhammer 40k Death Guard, also referred to as the Dusk Raiders, are a traitor legions of the Chaos Space Marines. The once followers of the Emperor, have now been corrupted by the Plague God Nurgle. Now they rot away within their power armour and are immune to all injuries.

Be the first to review “Nauseous Rotbone, the Plague Surgeon” Cancel reply 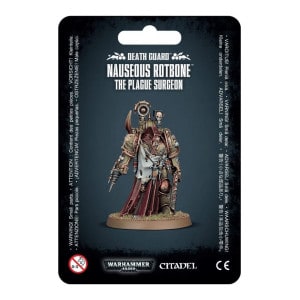 You're viewing: Nauseous Rotbone, the Plague Surgeon £13.90
Add to basket
We use cookies on our website to give you the most relevant experience by remembering your preferences and repeat visits. By clicking “Accept”, you consent to the use of ALL the cookies.
Cookie settingsACCEPT
Manage consent