Mysterium: Secrets and Lies Expansion brings new game components so that you can expand your original Mysterium board game! Do you have what it takes to solve the crime?

Mysterium: Secrets and Lies is an expansion for the original Mysetrium base game that adds more cards for 2-7 players aged 10 years or over. This set consists of 6 new characters, 6 new items, 6 new locations and 18 story cards.

Rather than making each investigator identify an object, the ghost will now use dream cards to reveal their story. Are you able to figure out how the ghost died?

In games of Mysterium one player will take on the role of the ghost while everyone else will represent a medium. To begin solving the crime, the ghost must recall all suspects who were present on the night of the murder. The ghost will randomly assign both location and murder weapon cards in secret to a medium.

During each game turn the ghost player will hand vision cards to each medium, refilling their hand to seven cards. These cards will present images to the mediums, who will make guesses on the suspects present.

When time runs out, the ghost will reveal whether the guesses are correct or not. If mediums guessed correctly they will move on to guess the location, those who guessed incorrectly will keep their vision cards and continue to receive new ones.

Once a medium has figured out the suspect, location and weapon, they will receive a clairvoyancy point for every hour that remains. If mediums fail to identify any vision cards before the seventh hour, then the mystery remains unsolved. However, they all succeeded, then the ghost will identify the culprit.

Find the full list of game components for Mysterium: Secrets and Lies below:

Be the first to review “Mysterium: Secrets and Lies Expansion” Cancel reply 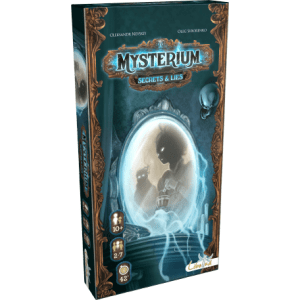 You're viewing: Mysterium: Secrets and Lies Expansion £13.34
Add to basket
We use cookies on our website to give you the most relevant experience by remembering your preferences and repeat visits. By clicking “Accept”, you consent to the use of ALL the cookies.
Cookie settingsACCEPT
Manage consent