In the game of Mysterium there is a crime to be solved and multiple suspects of murder. One player will take on being the ghost of the victim who will communicate with the rest of the group without speaking. Do you have what it takes to figure out the killer?

Mysterium is a ghostly game providing for 2-7 players aged 10 years or over to solve the ultimate crime. Go back in time to the 1920’s where Mr. MacDowell has noticed a supernatural being inside his house. Players only have seven hours to communicate with the ghost through actions only and unlock the mystery.

Visions of the ghost are represented through cards including all the ghost can remember from their death. Players will vote on the suspect, murder weapon and location to try and identify the killer. At the end of the game the ghost will reveal where the players have found the true killer and will hopefully rest peacefully, if not you may just have to try again…

Below you will find a brief description on how to play Mysterium:

Game Components for Mysterium are in a list below:

How to Play Mysterium

Be the first to review “Mysterium” Cancel reply 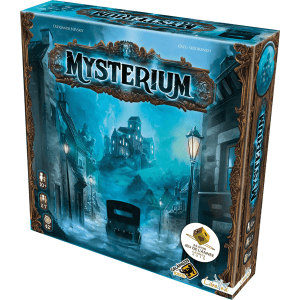 You're viewing: Mysterium £26.75
Add to basket
We use cookies on our website to give you the most relevant experience by remembering your preferences and repeat visits. By clicking “Accept”, you consent to the use of ALL the cookies.
Cookie settingsACCEPT
Manage consent