Unleash your superpowers and slay monsters in this Munchkin Marvel board game. This game allows you to take on the roles of iconic characters and comes complete with new monsters, allies and S.H.I.E.L.D identification cards.

Munchkin Marvel is an adventure game where 3-6 players aged 10 years or over will take on roles of iconic Marvel characters and slay monsters. This is the perfect game for any fan of Marvel comic books!

Unite with your family and friends to find magic items and kill everything you meet in this epic Marvel battle. You may even decide to go against your fellow players and steal their treasure to level up your character!

Munchkin Marvel starts with players deciding who goes first with any method of their choosing, such as rolling a die. Game play proceeds in turns, each including phases known as kick open the door, look for trouble, loot the room and charity.

Once the first player has finished their turn, the player to their left will take a turn and so on. The game continues until a player reaches level ten and wins. However, to reach this level players will need to kill a monster, unless a card states otherwise.

Find the full list of game components for Munchkin Marvel below:

Be the first to review “Munchkin Marvel” Cancel reply 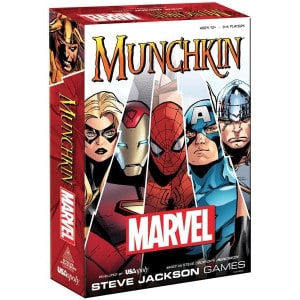 You're viewing: Munchkin Marvel £16.40
Add to basket
We use cookies on our website to give you the most relevant experience by remembering your preferences and repeat visits. By clicking “Accept”, you consent to the use of ALL the cookies.
Cookie settingsACCEPT
Manage consent