This incredible card game inspired by role-playing games such as Dungeons and Dragons is guaranteed to liven up any gaming session. Players will explore the dungeons, go up against monsters and backstab their friends!

Munchkin Deluxe is an adventure board game where 3-6 players aged 10 years and over will crawl through dungeons and fight against monsters!

Munchkin Deluxe has extra added components for a better gameplay including a game board, coloured pawns and player cards. This helps players to keep track of their moves and keep cards in place.

Players will need to overcome monsters by using both weapons and powers. Slaughter the Potted Plant and Drooling Slime before going up against the one and only Plutonium Dragon. The first player to reach level 10 wins the game!

In Munchkin players will take it in turns to draw an encounter card which will involve going up against monsters. Enter the dungeons, kill, steal and even backstab your friends in this adventure game!

Players will try to overcome monsters by using weapons and powers they will have earned during the game. Other players also have the option to help or hinder the player by adding more monsters for them to battle. Defeating a monster will result in treasure cards and levels. However, being defeated by a monster means players will lose treasure and levels.

Find the full list of game components for Munchkin Deluxe below:

Be the first to review “Munchkin Deluxe” Cancel reply 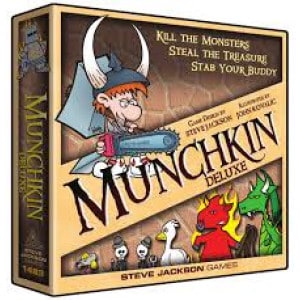 You're viewing: Munchkin Deluxe £20.01
Add to basket
We use cookies on our website to give you the most relevant experience by remembering your preferences and repeat visits. By clicking “Accept”, you consent to the use of ALL the cookies.
Cookie settingsACCEPT
Manage consent