Munchkin is a card game that is guaranteed to liven up any tabletop gaming session. Players will compete against each other to kill monsters and claim magic items!

Munchkin is a card game where 3-6 players aged 10 years and over will attack monsters and search for magic items! This game gives players the opportunity to either help or go against your fellow players, which will you choose?

Designed by Steve Jackson, this game greatly captures the dungeon crawling experience. The card game is based on the clichés of role-playing games such as Dungeons and Dragons. Slaughter the Drooling Slime and Potted Plant before making your way to the Plutonium Dragon!

All players all start at level 1 and the first to reach level 10 is the winner!

In Munchkin there are two different types of cards known as treasure and encounters. On each turn, players will drawing an encounter card which usually involves battling a monster. Enter the dungeons, kill everything, steal and backstab your fellow players in this adventure game!

Players must try and overcome monsters using any levels, weapons and powers they will have throughout during the game. Other players can also help or hinder the player by adding extra monsters for them to encounter. Defeating a monster results in treasure cards and developing levels. Being defeated by a monster results in losing treasure and levels.

Find the full list of game components for Munchkin below:

Be the first to review “Munchkin” Cancel reply 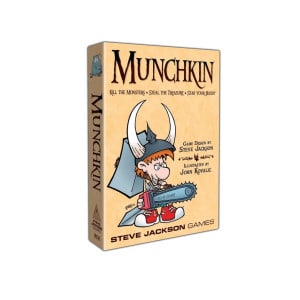 You're viewing: Munchkin £15.38
Add to basket
We use cookies on our website to give you the most relevant experience by remembering your preferences and repeat visits. By clicking “Accept”, you consent to the use of ALL the cookies.
Cookie settingsACCEPT
Manage consent