Introducing Big Potato’s unpredictable and amusing card game like no other! Players aged 13 and over can join another three friends or family members in a game all about muffins, exploding turtles and skateboarding cows!

Muffin Time  Game features Desmond the Moon Bear, Mine Turtle, Skateboard Cow, The Kid Who Likes Trains and of course, Mr Muffin himself in hilarious sketches found on all cards throughout the game.

Muffin Time  has an extra three card types, action cards, trap cards and counter cards guaranteed to put all players on edge. The blue action cards make stuff happen, such as drawing out cards, stealing cards, triggering mini games (such as rock paper scissors) or changing the rules of the game. The red trap cards punish, trick or surprise other players for doing certain things during the game, such as browsing the internet on their mobile phone.  You can choose to place these trap cards face down in front of you when it is your turn. These can also be replaced if you already have three in front of you. The green counter cards are your primary means of defence from other cards. For example, a counter card will allow you to stop the current action card and draw a new one for yourself. Each card has its own special uses, so make sure you know how to use them and when!

Begin the Muffin Time Game by following these steps:

Be the first to review “Muffin Time” Cancel reply 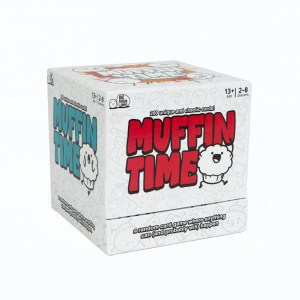 You're viewing: Muffin Time £18.75
Add to basket
We use cookies on our website to give you the most relevant experience by remembering your preferences and repeat visits. By clicking “Accept”, you consent to the use of ALL the cookies.
Cookie settingsACCEPT
Manage consent