Howdy partners! Prepare yourselves for the trivia game that features quick fire questions from Mr. Lister in his quiz shootout!

Mr. Lister’s Quiz Shootout Game allows you to take control with your very own rubber moustache. Gather 3-8 players aged 14 and over to begin your 30 minutes of quiz shootout fun! To begin, hand the moustache to the lucky player chosen to become the famous Mr. Lister and have him read out the question card that contains multiple possible answers. The first team to shout out one of the correct answers scores a ‘hit’, incorrect answers get a ‘miss’. The team with the most hits wins the card that features a drink from Mr. Listers very own bar, such as the ‘Howlin’ Coyote Hootshine’, ‘Bird’s Cola Tonic’ and ‘In the doghouse’.

If both teams happen to score an equal amount of hits during a round, they will send one player each to the ‘Last Chance Saloon’. This is the all-important question which only has one possible answer, so make sure to think long and hard as whoever guesses closest will win the drink card for their team. If you collect two drinks which are the same, you can get Mr Lister to confiscate a drink from the opposing team. If you are very lucky and get three drinks the same, you can swap them with Mr Lister for a drink of your choice. First team to get five different drinks are the winners!

The easy to learn and quick to play Mr Listers Quiz Shootout game comes with these easy-to-follow steps: 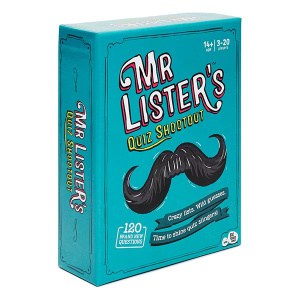 You're viewing: Mr. Lister’s Quiz Shootout £7.15
Add to basket
We use cookies on our website to give you the most relevant experience by remembering your preferences and repeat visits. By clicking “Accept”, you consent to the use of ALL the cookies.
Cookie settingsACCEPT
Manage consent