This kit contains all the necessary components to assemble themightiest Warboss around, Mozrog Skragbad! Also including the option to alternatively assemble the Beastboss on Squigosaur.

Mozrog Skragbad is by far the surliest and meanest Beast Snagga to date. He will charge into battle on his great white squigosaur known as Big Chompa, who is a total force of nature. After nearly being swallowed whole by the goliath gutnaw, he is now stuffed full of bionics and more determined than ever before. This kit also includes the option to assemble the Beastboss on Squigosaur as a slightly more chilled-out alternative.

There are very few Orks who are tougher than Mozrog, the beast hunter once spent many days just hunting after the most dangerous beasts he could possibly find. One of these monsters was almost eating him alive, but Mozrog managed to claw his way out and return to his tribe to be patched up with different bionic bits. In battle, he will ride the unmissable squigosaur named Big Chompa, the only living creature as bad-tempered as Mozrog himself.

Mozrog and Big Chompa make the perfect addition to your army. Between Mozrog’s bionics and the Big Chompa’s dangerous jaws, no foe will escape unharmed. We highly recommend using the Citadel Plastic Glue and Paints to assemble your new miniature and ready them for future battles of Warhammer 40k!

Be the first to review “Mozrog Skragbad (Orks)” Cancel reply 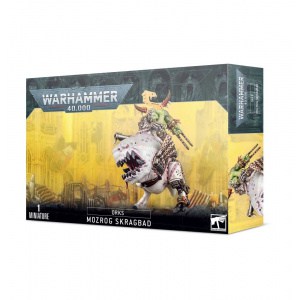 You're viewing: Mozrog Skragbad (Orks) £25.01
Add to basket
We use cookies on our website to give you the most relevant experience by remembering your preferences and repeat visits. By clicking “Accept”, you consent to the use of ALL the cookies.
Cookie settingsACCEPT
Manage consent