This plastic kit contains all the components necessary to assemble Mortarion, Primarch of Nurgle.! Including Weapon Options, Modelling Options, Citadel Base and more!

This multi-part plastic kit contains all the components required to assemble Mortarion, Daemon Primarch of Nurgle. The towering model looms over the Death Guard and is clad in power armour which is known as the Barbaran Plate. Covered in both rust and rot, the armour features skulls, spikes and Nurgle symbolism throughout each component. Mouldering robes, chains and a rotten cowl can all be seen hanging from this armour, covering the pipes that feed into his breathing apparatus. One may assume that the ventilator isn’t delivering fresh air to Mortarion and delivers disease instead.

For around ten thousand years Mortarion has crushed his enemies during battle as he swoops in on vast, creaking wings. The thudding beat fills the enemy with dread as standing in the presence of the Death Lord is often lethal. His opponents will choke and collapse as they breathe in the plagued air that surrounds him.

Armed with 2 foul weapons known as Silence, a razor-sharp blade that features brutal chain-teeth stained with the blood as well as The Lantern, an ancient energy pistol making him more than ready for battle. There is also two modelling options for these weapons, one shows the two weapons down by his side while the other features a more aggressive pose.

Be the first to review “Mortarion: Daemon Primarch Of Nurgle” Cancel reply 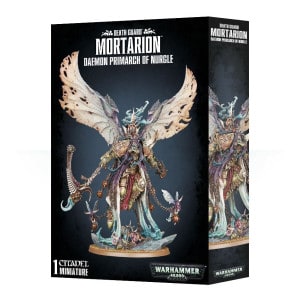 You're viewing: Mortarion: Daemon Primarch Of Nurgle £74.01
Add to basket
We use cookies on our website to give you the most relevant experience by remembering your preferences and repeat visits. By clicking “Accept”, you consent to the use of ALL the cookies.
Cookie settingsACCEPT
Manage consent